REVIEW: The Walker Brothers - Everything Under The Sun

The Walker Brothers had two or maybe three phases, first the original Walker Brothers sound with albums and singles from 1965-1967, then the reunion with its country guitar vibes from between 1975-76, and then the final Walker Brothers album, Nite Flights (1978) in all its Frankenstein's monster glory! All are here in chronological order thankfully - unlike the oddly themed Five Easy Pieces Scott Walker box set - and through listening to these tracks in chronology an incredible yet incredibly short career is revealed, a career that wasn't as happy going as it may have first seemed but instead was laced with tension between the three 'brothers' and the quickly changing shape of the record industry.

The most interesting thing about this box set is seeing how quickly Scott developed a style all his own, singing some of the definitive versions of other peoples songs as well as moving outside of the standards to write his own material with an incredible sense of composition and space and of course an incredible voice. Listening to him evolve and challenge himself over the years of 1965-67 is pretty shocking, I guess this was a time of constant change in style and culture, of fast turnovers, but still, compare 1965's 'Doin the Jerk' to 1967's 'Orpheus'... it really is like night and day. You can even hear the threads of 2006's The Drift in some of these tracks, in particular in the haunting organ lead Scott written 'Archangel' with its deep vocals over swelling drones... an incredible listen.

Obviously its not all about Scott, the late John Maus has some great moments on these recordings too, although writing far less tracks than Scott he wrote and sang some great tracks, non better than the self penned 'I Can't Let It Happen To You' with its lulling vocals, softly strummed guitars and brilliant structure that never gets old. I love this track and it's a big highlight of the box set. 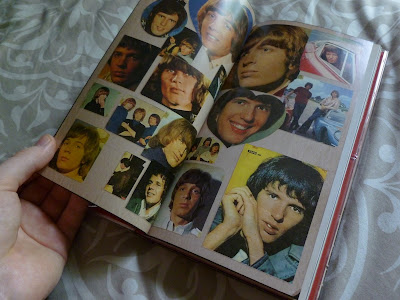 The packaging contains a forty-eight page booklet attached in the middle of the set with plenty of photos and a schizophrenic design which surprisingly - for me at least - does not detract, but works in its favour, looking like an annual or a crazy teen's fanzine. It has a lot of funny pictures of the handsome fellows and their lovely haircuts and an easy to read set of notes throughout. My only gripe with the packaging is that the fifth disc isn't very well protected like the other discs but is inserted into the final page of the booklet which is made of a thicker card, it works well enough but it doesn't provide the kind of protection I would like for this set.

The Walker Brothers sadly never released a stand out album, I believe this was due to the nature of the group as a commodity of sorts and the fact that at the time albums did not tend to have an integral theme or sound throughout, these kinds of 'concept albums' weren't the norm as they are today. Yet when you consider the amount of content they pushed out in their first phase - around sixty tracks in two years - how could you blame them, everything was done so quickly, even the formation of the group, life was moving too fast to take in the bigger picture. That's not to say they did not have a sound all their own, they did, but the albums are not great listens in their entireties.

Listening to these albums in chronology you can feel the group falling apart as the years go by, the better tracks - usually sung solo by Scott - go from strength to strength whilst the lesser tracks seem to grow in number and become more and more mundane. Some of these lesser tracks still hold some charm and character yet they pale in comparison to the Scott tracks.

Scott Walker would end up going solo shortly after 1967's Images and rely further and further on his own writing talents until the classic Scott 4 in 1969 would feature nothing but original material. Sadly this album did not fare well commercially and would arguably be the last classic Scott Walker album till 1984's Climate of Hunter. Between  Scott 4  and Climate of Hunter Scott would slowly revert to the standards, releasing albums of lacklustre covers that bombed at the time of their release and are still seen to many - including Scott himself - as a low point in his career, Scott pretty much faded into obscurity, depression and drink. Reforming The Walker Brothers probably sounded like the best idea at the time and suprisingly enough 1975's No Regrets did fairly well in the charts and sparked two further albums, Lines (1976) and Nite Flights (1978). With No Regrets and Lines we find The Walker Brothers matured yet very melancholic, striped down to country guitars, pianos and covers. These albums, although not terrible - there are hints of greatness like 'Inside of You' - feel like a giving in, a sombre, melancholic and tired sigh to things that could have been.

Roll on 1978's  Nite Flights, the last Walker Brothers album, made up of four tracks written by Scott, two by Gary, and then four by John... all original material, the last chance, the final letting go. Their label GTO was folding at the time and it feels like a last push, an all or nothing assault. Scott's tracks are the star of the show here, all pointing toward a new direction for Scott, full of abstract beauty, cryptic and imagintive lyrics and splintering compositions that glisten and throb. I can't praise these tracks enough, if it wasn't for these tracks there might not have been a Climate of Hunter - and by extension, no Tilt, no The Drift. They marked Scott Walker's return to song writing since 1970's Til The Band Comes In, apparently up until this point Scott was not allowed to include any original compositions on his solo records or with The Walker Brothers so this must have felt like an incredible release.

The rest of the tracks on Nite Flights pale in comparison to the first four Scott tracks - how could they compete with tracks as intense and beatiful as 'The Electrician'!? - but they do a good enough job, well John's do anyway! Gary's tracks are very skipable with their slow boring pace and half hearted vocals. John's tracks have a dicso/funk feel to them and although they kind of all blend together as one they are well polished and are easy enough to swallow if not very spectacular. It's a shame that these tracks should be on the same album as the four Scott tracks, they have no chance in hell of competing with these tracks...

As well as all the singles and albums this set contains unreleased tracks as well as alternative takes of a few tracks and these are welcome. It's nice to hear 'Tokyo Rimshot', an instrumental (unfinished?) Scott track for Nite Flights that has a Yellow Magic Orchestra feel to it. These tracks help pad out the box set and make this feel like a real completist's set.

Conclusion
This is a great set that contains all of The Walker Brothers tracks, duds and all. This box set isn't for everyone but it is highly recommended for anyone who is into the solo work of Scott Walker or John Walker and wants some background history and context, there are also some rare tracks and photos here for the collectors. The Walker Brothers will always be misunderstood and misrepresented in compilations, whereas here you literally have 'Everything Under the Sun', every track, including some amazingly underrated gems that will stay with me for a long time and alone warrant a purchase.


some favourite tracks...
Love Her
The Girl I Lost In The Rain
In My Room
Archangel
Mrs. Murphy
Orpheus
I Can't Let It Happen To You
Nite Flights
The Electrician