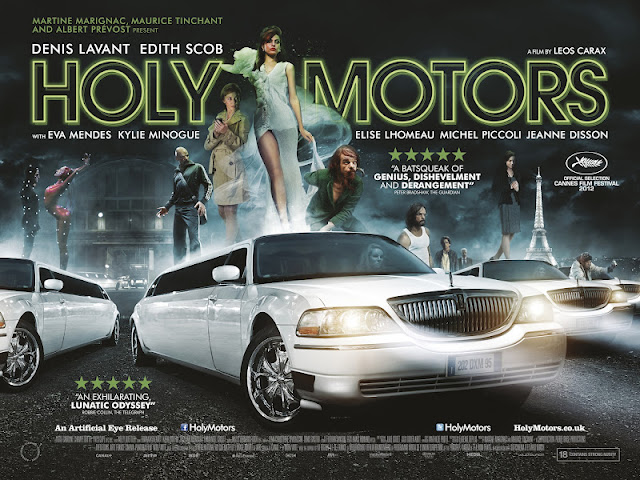 The safety of limousines, the beauty of the act and cinematic explorations in
Leos Carax's brave return to feature filmmaking in over 10 years. 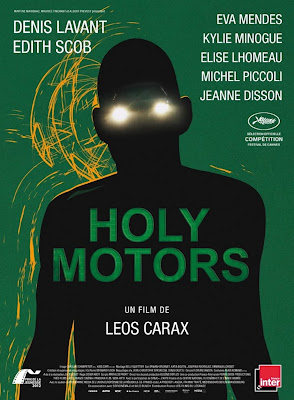 
When I first heard that Leos Carax was coming back to feature filmmaking I was pretty excited to say the least, his 1986 film The Night Is Young (Mauvais Sang) remains one of my favourite films; with its effortless experimentation and poetic provocation it is an inspirational film to say the least. Carax's previous film was the polarising Pola X, scored by Scott Walker and filmed over 10 years ago.

For months the only details that were released about Holy Motors was the title and that it would star a Carax regular, the incredible physical actor Denis Lavant alongside Kylie Minogue of all people. For some reason the title seemed to bring to mind images of grindhouse films - could this be what Carax was working on? Surely not... and as it turned out it was far from grindhouse! The title also reminded me of David Cronenberg's Crash or David Lynch's Lost Highway, which as it turns out both share similarities with Holy Motors - for instance, all three films deal with the body and technology to differing extents. 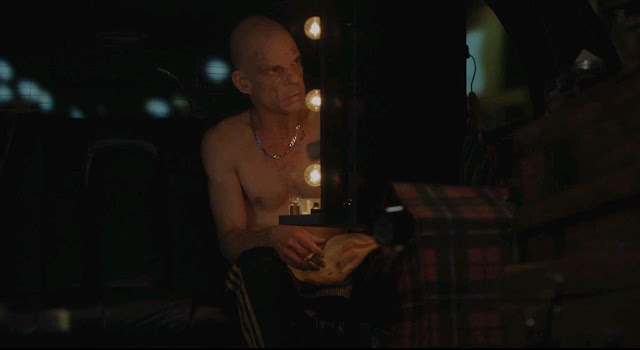 Holy Motors follows a seemingly regular day in the life of Monsieur Oscar (Denis Lavant), at the start of the film we find Oscar leaving home and climbing into a white stretch limo, waving goodbye to his kids as he goes. Oscar has 10 appointments to complete by the end of the night; each are timed and location specific and require him to take on the identities of 10 very different individuals, acting out a series of scenarios such as begging, kidnapping a model or killing a specified target. He is driven from appointment to appointment  by Céline who is played brilliantly by Edith Scob - perhaps best know for her role in Eyes Without A Face. The limo represents the only safe place for Oscar, a place for recovery and preparation, where he can simply be himself and does not need to put on an act. From what is revealed of Oscar's character whilist in the limo it would appear that he finds his job extremely physically and mentally draining, to the point that he finds it hard to eat and doesn't seem to have a bearing on his own identity anymore. In a Q&A after the screening I went to, Carax said that he finds limo's interesting as nobody owns them, they are instead rented out. He is also interested in the fact that they are luxurious vehicles that both draw attention to themselves yet afford privicy to whoever is inside.

It is never made clear why Oscar must take on the roles of these diverse characters but it appears necessary to mantain a world order, as if life itself has become nothing more than an elaborate set of interlocking acts, where what is real has become dislodged by the virtual. This strange dystopia - that is suggested but never fully elaborated - gives the film a very interesting science fiction feel, similar in respects to the way Andrey Tarkovsky approached the genre with his masterful 1972 film Solaris; this is science fiction but not as you may expect, and is without a doubt one of the most important science fiction films in many many years. 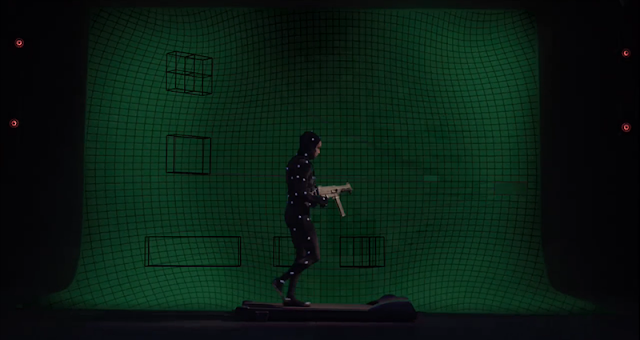 One of the most intriguing and captivating things about Holy Motors is that it contains moments that although very particular to cinema are nevertheless rare occurrences, moments that threaten to tear the screen apart, transcending the supposed boundaries of cinema, burning into the mind like a wild hallucination. These scenes play with the 'cinematic world', transforming it, turning it upside down, contorting it, presenting the viewer with a transcendent sensory overload... although I wont detail particular scenes as I don't really want to ruin the surprise!

It could be argued that the film as a whole deals with the transformation of the 'cinematic world', defying cinematic conventions and turning the act of filmmaking on its head. What is an actor, who is the character, what is real and what is virtual? Where does the real world end and the 'cinematic world' begin? Is cinema disrupting reality or reflecting it? These questions are at the forefront of Holy Motors yet it doesn't claim to hold the answers to these questions, instead it exposes them and in so doing reveals a skeleton of cinema - similar to, yet distinctly different from the way in which French directors such as Jean-Luc Godard or François Truffaut did with the French New Wave. It is difficult for me to fully articulate but Holy Motors  seems to simultaneous expose cinema's hidden wiring whilst also revelling in its inherent and labyrinthine mysteries. It is this duality of revealing and veiling that confuses the real and virtual worlds and yet brings them together as one. 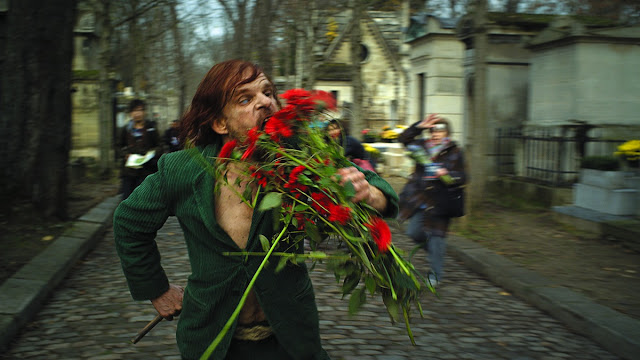 The film is graced with a fantastic cinematographic style that somehow manages to contain all its bombastic disparate elements and make them feel like they inhabit the same world - a mean feat I'm sure. A film that can go from a crazed monstrous 'dandy' hobbling through a graveyard chewing flowers from a gravestone, to an old man laying in a bed whispering his final words to his great neice, and some how make them feel like they belong together has to be applauded! Carax's directing is unique, natural, intelligent and never overstated or gimmicky. In fact it comes across very sincerely and is often frightening but just as often absurd and hilarious.

I enjoyed almost all the different characters that Oscar plays during his day's worth of appointments although some I found to be more engaging than others. The difficulty with a film like this though is that it feels boundless, like it could simply keep going; it's difficult to know where it should start and where it should end. Carax wisely decided to set the film across the events of a single day which gives the film a sense of journey, from the mornings first appointment to Oscar's quite return home at the end of the night. 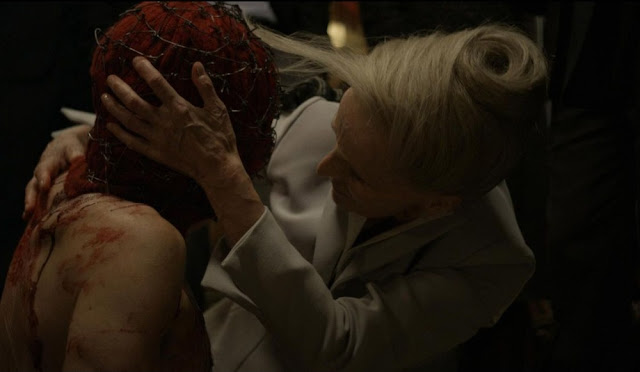 While I absolutely loved Holy Motors I would not recommend it to everyone. I'm sure many people would simply dismiss it as a self-indulgent collection of short films, yet I believe it is an undeniably unique, creative and provocative film that will be talked about for years to come. Holy Motors is surely one of the most important films of the year, and with its oddball personality and uncompromising vision as well as its unique and forward thinking contributions to the art of filmmaking it stands up there with the best and most provocative science fiction films ever made. For those brave enough Holy Motors will be a journey that wont be forgotten quickly. If David Cronenberg's Cosmopolis - another brilliant film which premiered at Cannes this year - is about the stock market, excess and consumerism, using the limo as a symbol of monstrous indulgence, then Holy Motors on the other hand is a film about re-enactment, the cinematic and the virtual, and uses the limo as space of privacy and reflection, as well as a symbol of movement, metamorphosis and life.