REVIEW: To the Wonder 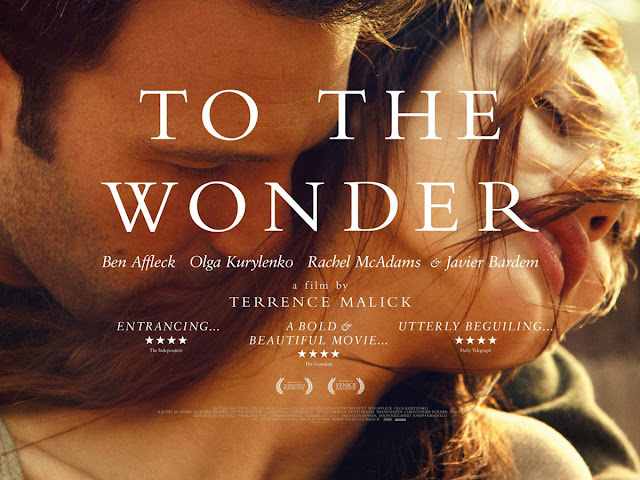 Terrence Malick's To the Wonder, a tale of faith and the troubles of modern love


To the Wonder is centred around the relationship between American property developer Neil (Ben Afleck) and Parisian dreamer Marina (Olga Kurylenko) as their lives fluctuate in and out of sync. In parallel to the relationship between Neil and Marina is the story of Father Quintana (Javier Bardem) and his questioning of God's role on Earth. The two story lines complement each other well and often reflect themes in one another such as loss of faith and a questioning of direction and purpose in modern day life. Although To the Wonder has a more direct and conventional story than director Terrance Malick's previous film, 2011's The Tree of Life,  it is still a film that is less defined by narrative flow and more by its unique cinematic language and a constellation of questions and subjects. The story and themes of To the Wonder are conveyed through fleeting imagery and montage paired occasionally with sparse voice over; this lends the film an unusual feel which can take a while to adjust to but once you have adapted the film settles into a dreamlike state where emotions and imagery flicker like half forgotten memories.The film could be described as a companion or coda to The Tree of Life as they share a similar style and set of themes, yet they feel somewhat distinct from one another; To the Wonder focuses on adulthood and is grounded in modern times whereas The Tree of Life focuses predominately on childhood and takes place across aeons.

The film is told mostly through the eyes of Marina who at the beginning of the film moves to America with new boyfriend Neil in hope of a better life for herself and her young daughter. The neighbourhood they move into has a stale purpose-built feel to it and although it is never explicitly stated it seems as though Neil would have acquired this generic and lifeless house through his work as a property developer. Surprisingly some of the film's most poignant themes are ones of gentrification and social divides; Neil and his company are seen taking down old and well lived in houses to make way for generic housing estates. The poor are pushed out as the rich look to start families and lead the 'American dream'. Father Quintana can be seen going door to door in this soon to be forgotten neighbourhood, yet Father Quintana himself struggles to keep faith and continually questions where Christ may be and what role he takes in modern life. This struggle for happiness and faith is mirrored in Neil's character who tries to lead an honest and meaningful life but who ultimately appears hollowed out by society.

From the opening shot there is a sense of pure conviction and belief which makes To the Wonder a unique and inspirational film to watch. There is a sense that Malick has been given the freedom to experiment and improvise on set which creates some interesting moments. To the Wonder sees Malick nurturing and experimenting with his distinctive cinematic language and as with all experiments some ideas inevitably work out better than others. For instance the film focuses heavily on tenderness and conflict between characters and visually conveys these emotions through superb fleeting editing and brilliant camera work, yet these scenes are sometimes coupled with dialogue that intrudes and disrupts the flow and leaves a bad taste. Sometimes the writing is fantastic and puts into motion a new set of associations yet from time to time it feels unneeded and a little bloated. Another complaint that could be made about the film is that Olga Kurylenko's character can feel a little irritating and naive, perhaps too often seen dancing around fields and getting physical with Ben Affleck's character... yet this outgoing and energetic personality makes a good contrast to Ben Affeck's muted character.

Whilst perhaps flawed in places To the Wonder has so many great elements that it becomes easy to ignore the few problems that do exist. The craft that has gone into the film is phenomenal; the photography often transforms the mundane into something theatrical and beautiful, the camera works together with the actors and becomes an actor itself, interacting with the environment and the characters. The soundtrack - composed mainly of classical pieces - also becomes an actor, adapting to the mood and working together with the edit to build tension and emotion throughout scenes dynamically. The music is particularly good in the scenes with Neil's short-lived relationship with old school friend Jane (Rachel McAdams) around half-way through the film; high flying sporadic notes dart through the scenes and seem to suggest excitement and pleasure as much as guilt and lust.

There are very few modern filmmakers that you could compare Malick's recent output to; his films have more in common with the montage heavy films of Sergei Eisenstein such as Battleship Potemkin and Strike and the sensual, dreamlike work of  Andrei Tarkovsky in film's like Ivan's Childhood and Stalker than other American filmmakers of his generation such as Steven Spielberg or even David Lynch. He has created a cinematic style that is distinctly his own, a style that is incredibly composed yet energetic and mobile. To the Wonder asks for a more active role on behalf of the viewer than your 'regular' film; here the story and 'meaning' does not lie in the dialogue or in a particular scene but in memories and experiences that are pieced together by the viewer, encouraging an engaged and creative experience to occur. Inevitably, To the Wonder will not be for everyone, some will find its unique style idiosyncratic and contrived and find the characters hollow and annoying... and in some respects they would be right. To the Wonder, whilst beautiful and peerless in its craft is a film that never fully takes flight and feels too similar to his previous film, the much stronger, bolder and ambitious The Tree of Life. It never fully emerges from the shadow cast by The Tree of Life, instead offering up a stylistically similar film with a more focused story... saying that, more of the same from Terrence Malick is never a bad thing in my books! To the Wonder still offers an experience unlike many other films, it may not be perfect but fans of Malick's recent work should find a lot here to dive into.