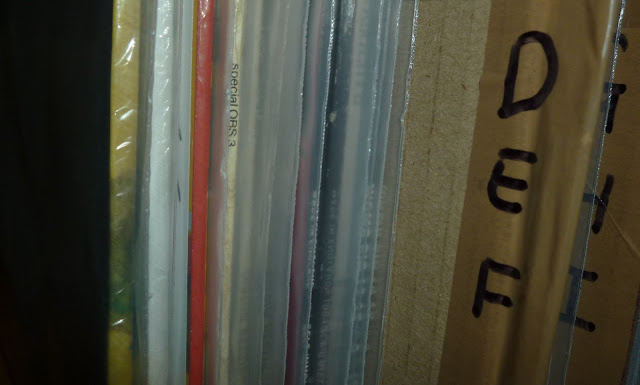 Welcome to section E of my vinyl collection, an informal trip through my collection with quick photos and descriptions. I haven't optimised any of the photos using Photoshop as I usually would, the main reason for this is it would be too time consuming as there are a lot of records to get through. For each vinyl there will be a little write up, it might be about the packaging, the music, where I got the record etc... enjoy!

This is a slightly smaller post than usual but I'm also working on F which is a lot larger. As always, click on the images to enlarge them. 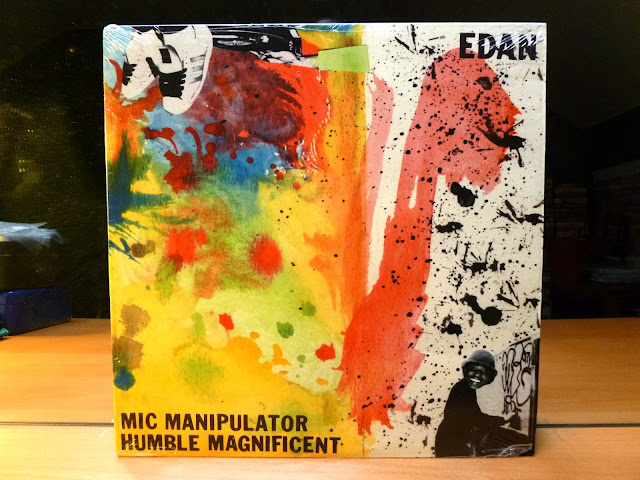 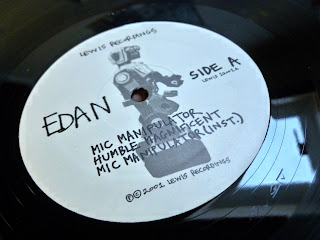 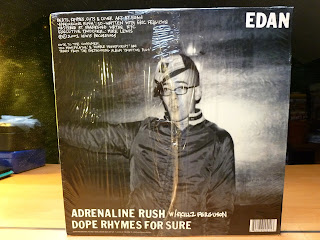 You can get this early Edan EP for a riduculous price these days... and it is an awesome little set of tracks that would lead on to his often brilliant 2002 album Primitive Plus. The A-Side has a vocal and instrumental version of Mic Manipulator, a poppy and subtly jazzy old school hip hop track with some really creative lines and nice production. Side A also includes the track Humble Magnificent, this track isn't as strong as Mic Manipulator but still has that unique Edan flavour. Both of these tracks would end up on the Primitive Plus album.

Side B has two non album tracks starting with the tense and punch Adrenaline Rush with Skillz Ferguson and is an early taste of Edan's more intensely collaborative work on Beauty And The Beat. The track is a little short but is enticing. The next track has a nice flow to it but is a bit claustrophobic and overly oddball in terms of samples. I got this in really good condition for around £2 and it comes highly recommended. 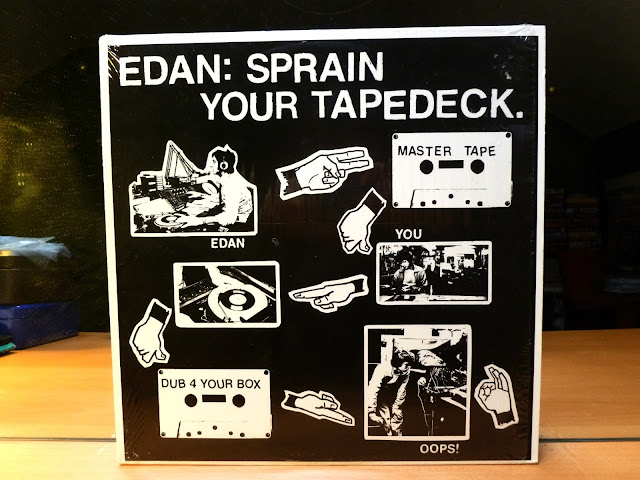 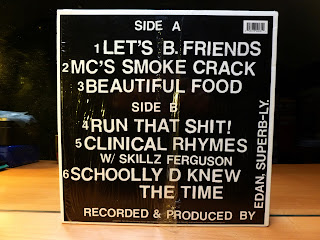 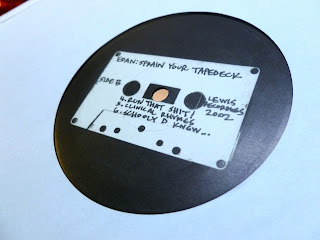 
Sprain Your Tapedeck was released in the same year as Edan's first album, Primitive Plus, and features a number of great tracks that didn't end up making it on to the album for whatever reason. The only track that would be featured on the album is Run That Shit! which oddly enough is one of the weakest tracks on this otherwise pretty awesome EP! The EP has a real rough old school hip hop feel, rough, quick and passionate. The first track Let's B. Friends is a funny fun-loving freestyle track about hanging out with MC's and being best friends. It sums up part of Edan's philosophy, that rap doesn't have to be about guns and violence but can be formed around communities, artistry and passion. MC's Smoke Crack follows this passion for hip hop's history but pairs it with drug use, 'MC's smoke crack, I smoke aluminium.' Then we have one Edan's funnier and joyous tracks, Beautiful Food, a list of food has never sounded so good... mmm...

Side B opens with the smooth Run That Shit! which is about mugging people, it's excessive to the point that it has to be a joke 'yo give me that begel I'm hungry' but it kind of gets revolting by the end where after having sex with a girl he nicks all she has... I hope it's a joke! Clinical Rhymes pairs Edan with Skillz Ferguson once more for a rough back and forth set of lines that works brilliantly. The track has some funky samples which gives you a feel of what Edan would be doing on his Beauty And The Beat album. The last track is a live dedication to Schoolly D which shows Edan's prowess as a multitasker. I got this EP for £3 as it was labelled as 'marked' but it plays perfectly and only has slight marks that obviously get drowned out by the loud hip hop beats. 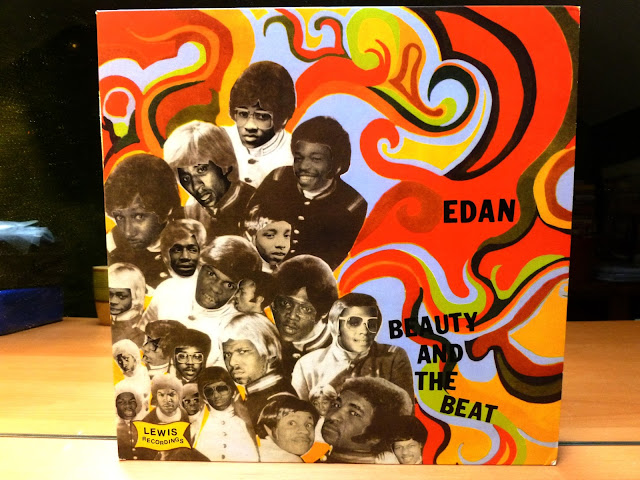 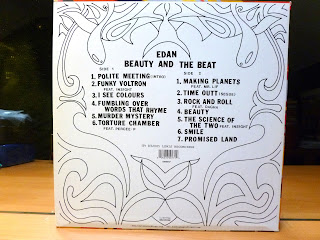 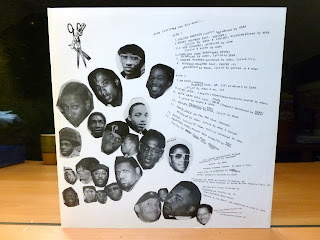 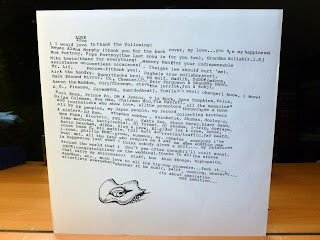 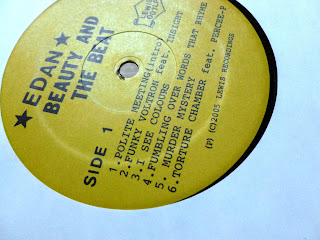 Beauty And The Beat marked a turning point for Edan, the production went widescreen, taking in a ton psych samples and live synth noodling whilst continuing Edan's love for crate digging and dedication to hip hop's very early foundations of love and community. It's a short and strange album that brings together two disparate elements that perhaps shouldn't blend together, psychedelic rock/pop and old school hip hop... yet they blend seamlessly and actually create something magnificent and unique, it's a shame that more artists haven't followed his lead on this new style, this really should have started a sub-genre but alas...

The album is filled with brilliant and varied tracks but highlights are the bright rap dedication Fumbling Over Words That Rhyme, the intense and speedy Torture Chamber (feat. Percee P), Rock And Roll (feat. Dagha) with its barrage of rock band name and lyric references... honestly, I love the whole album and wish all hip hop was as creative as this. To top it all off it has incredible artwork with faces of old school hip hop pasted on to psychedelic sgt. peppers esq bodies. To date this is the last Edan vocal album, in 2009 he released the awesome 30 minute instrumental psych-hop album Echo Party but fingers crossed a new album is on the way in 2013. 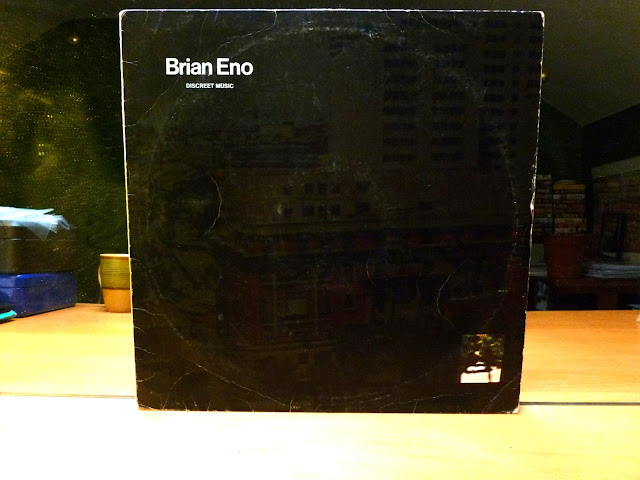 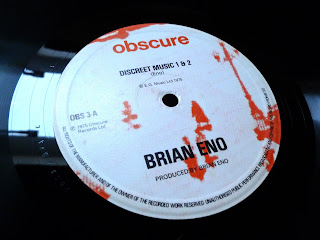 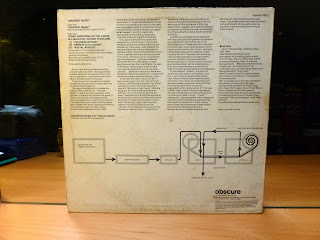 
Discreet Music, Eno's first solo 'ambient' record from 1975 has become a fairly influential piece of music that people often cite as one of the first truly ambient pieces of music. Eno gave instructions on how to listen to the music and asked that it be played at a level that blends with noises in the environment. The music was created through a string of equipment that delayed the playback and recording of the music and made complex loops of synth lines. You can definitely hear a bit of Discreet Music in Boards of Canada's early work, there is a similar wheezy sound to the synth tones. I like Discreet Music but it doesn't exactly thrill me or get my brain cogs moving, it just kind of sits there looking pretty, which is fine and it does have it's own unique charm but I prefer my ambient a little more engaging.

The second side is three variants on The Canon in D Major by Johann Pachelbel, the piece has been slowed down and deconstructed with bars separated and looped to form new pieces. The three variations are performed by The Cockpit Ensemble who worked a fair amount with Gavin Bryars (perhaps they were his ensemble?). Both sides appear to be live recordings and have recording dates, Discreet Music was recorded 9th May 1975 and Three Variations was recorded 12th September 1975. Discreet Music was released on Eno's own fairly short lived Obscure label which released some great music including Michael Nyman's Decay Music and John Cage & Jan Steele's Voices and Instruments. The original Obscure vinyl have become pretty rare and sought after although mine didn't cost much as it is a little beaten up! A nice little item to own.