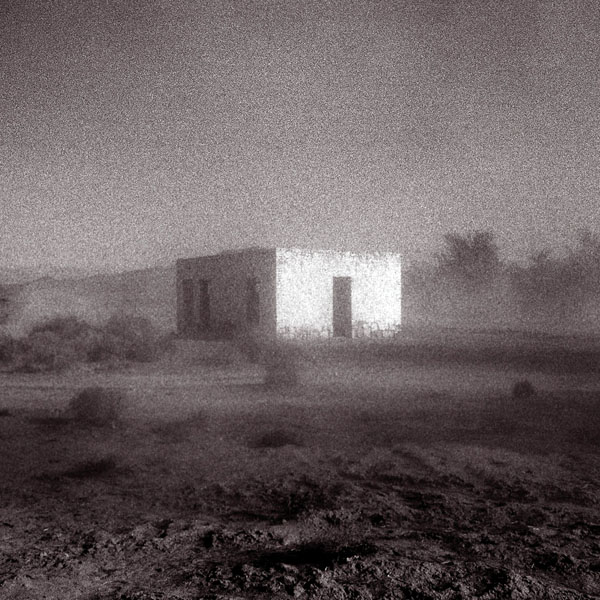 Out of the fog and debris comes a new record from Canadian post-rock giants GY!BE

I first heard Canadian giants of 'post-rock' (if you want to call it that) Godspeed You! Black Emperor after a chance buy of their 2002 album Yanqui U.X.O. in 2004. I saw the album in the sale racks of Music Zone (a northern arm of Fopp that used to be around) and the cover with its falling bombs instantly caught the attention of my 16 year old self. I knew I had to buy this album and after the exchange of a measly £7 the album was mine.

The importance of the packaging for Yangui U.X.O cannot be over emphasised.. this was in the days before the internet (at least in my house!) so every little detail became a clue to this magical and enigmatic group. I poured almost as many hours into analysing the packaging as I did listening to the music. To my young ears Yanqui U.X.O. felt like a gift from another planet, tracks stretched on for over 20 minutes during which not a single word was sung and the playing was so raw and tangible, it really was unlike anything I had heard before. The album left such an impression on me that I found it hard to break away from its bleak colossal world and it took 40+ listens before I would listen to another album.

The years went by without a new album, allowing me to dig through their rather small discography. Their 2000 release Lift  Your Skinny Fists Like Antennas To Heaven would come to hold a special place in my life alongside Yanqui U.X.O. but where was this new album? Band members would go on to new projects - most notably Set Fire To Flames and A Silver Mt. Zion - but none of these projects really got me excited the way GY!BE did, leaving me wanting more. Rumours would circulate year upon year of a new GY!BE album but to no avail... that is until October 2012... out of nowhere came a new GY!BE album in the form of 'Allelujah! Don't Bend! Ascend!. 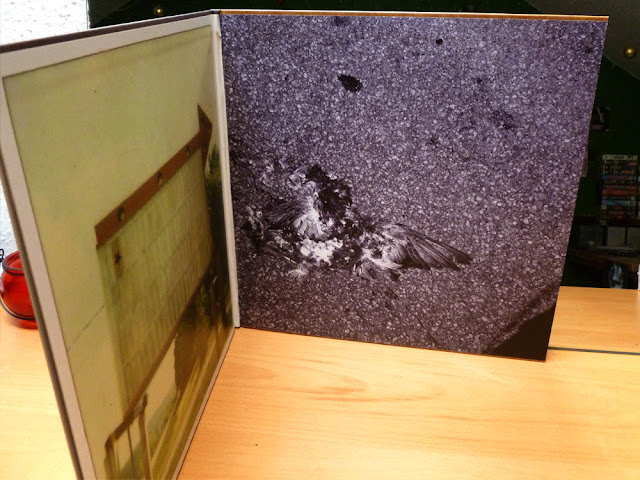 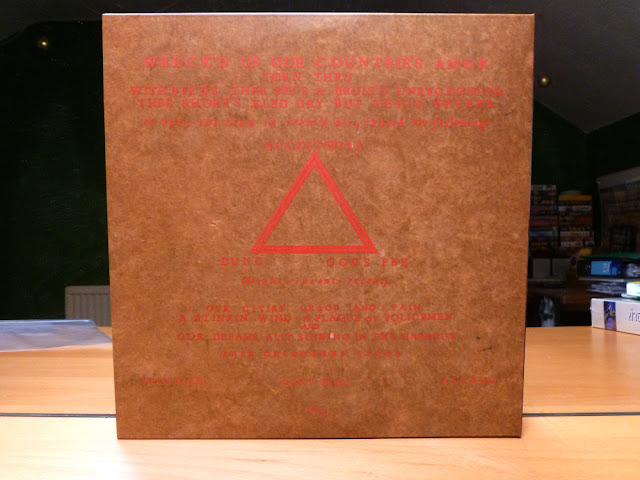 The band started selling the album at their gigs from the 1st October and it went on general release on the 15th. The album launched completely out of the blue and shocked the music world. The strategy the band chose to release this album with really worked in its favour, creating a lot of hype very quickly throughout the internet. It could be suggested that the way 'Allelujah! was released - with no press build up or promotion - was a critique of the current music culture. No promos were released to the media and the first people to hear the album were fans who paid to see them live and were lucky enough to bag a copy of this new album.

The album is comprised of two 20 minute pieces separated by two 6 minute textural drone tracks. The vinyl edition of the album places the two 20 minute together on a 12" record and groups the two remaining tracks on a 7". The first track Mladic opens with one of the only field recordings on the entire album, it sounds like a military radio relay of information '...with his arms out stretched...' '...with his arms out stretched? Can you get him? Do you see him?...' bringing to mind images of Christ on a cross as well as the way information travels around the globe. I wish this field recording was expanded on throughout the track but sadly it is quickly swamped by guitar rumble and fiddley strings. It doesn't leave much of an impression on the album that follows and while very interesting and intriguing it ends up feeling too short lived and a little tacked on.

Layer upon layer of buzzing guitars build Mladic up surprisingly quickly before swooping high pitch guitar bleats fall through the smoke like seagulls pecking at your face. The effect is startling and is easily one of the highlights of the album. Hammered dulcimer push the track into a throb of percussion, guitars and noise that escalates and escalates until a lead guitar line takes charge and transports everything into a heavy alt. rock groove of raw energy. The rest of this 20 minute track builds around a number of infectious guitar lines that only get heavier and heavier as the track progresses. The sound is extremely loud and nowhere near as subtle as some of GY!BE earlier work... the band just push and push the sound until breaking point and if you're like me you'll be grinning very widely by the track's end. 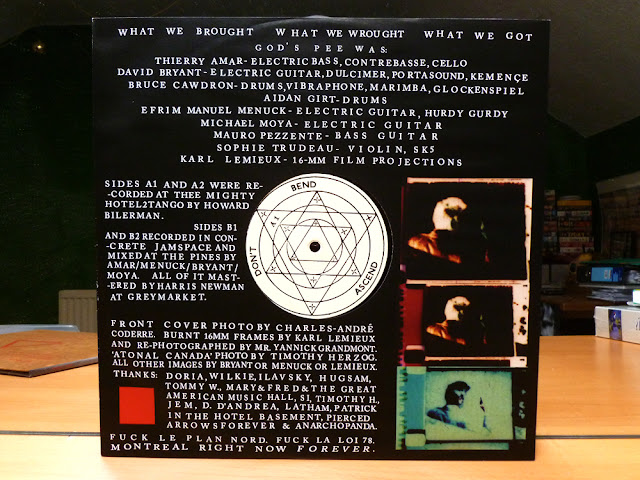 The next track is the first of two 6 minute drone tracks, Their Helicopters' Sing, a fairly short twisted ambient piece full of very sharp edges. The main sounds I pick up are processed strings and gently plucked guitar but from around 2 minutes into the track a hurdy gurdy just swamps everything around it and things get a bit messy and heavy handed. This is most definitely the low point of the album and comes across as little more than an interlude, a stop gap between the meat of the album. The track reminds of a Tony Conrad piece but the detail isn't acute enough and the track isn't long enough to really get the energy going like a Tony Conrad or Phill Niblock 'maximalist' piece.

Next is the second of the two long form tracks, We Drift Like Worried Fire. Whereas the guitars took centre stage for Mladic it is the strings that are brought to the forefront for We Drift Like Worried Fire. The track opens with what sounds like a broken tape loop of plucked violin strings, the loop misses a beat here and there and is treated with a slight delay which reminds me of an eerie horror movie soundtrack, like the sound of blood dripping onto a kitchen floor. Strings and e-bow guitars slowly float into the track, the instruments blend together in a way to create a sound very similar to the theremin with its smooth weeping character.

The track pretty much comes to a standstill before a guitar picks up where the plucked violins left off, throwing the melody into a very mournful march of strings and percussion. The track builds up pace and transforms this feeling of mourning into a jubilance almost miraculously. If there is one thing GY!BE pull off very well in this track it is getting a wealth of different emotions bouncing off one another in quick succession, it can be a little disorienting but the strings tie everything together (pun not intended!). The track progresses and transforms rather smoothly until the half way point, from here the tracks startes afresh after the previous 10 minute build. This new section starts off a little mopey but is built upon to the point that it almost sounds radio friendly and cheery, sure to rub some 'sitck in the mud' fans the wrong way. The track ends with one last 3 minute piece that really reminds me of parts of Yanqui U.X.O. in its arrangement of drums and strings. A nice, if a little brief, way to finish the track. 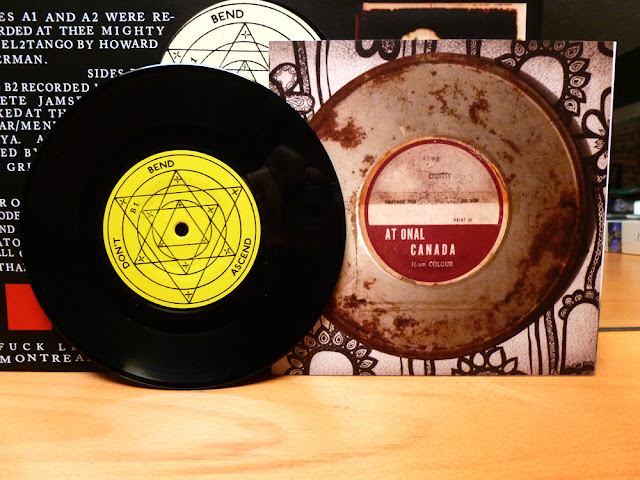 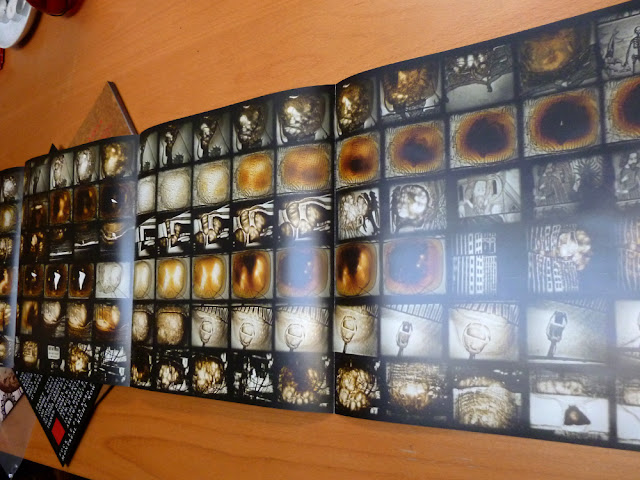 To round up the album we have the second of the 2 shorter drone tracks, Strung Like Lights At Thee Printemps Erable. This is easily the better of the two shorter tracks and has a lot more going for it in terms of arrangement and texture. The track is full of noisy buzzing guitars but also has a lot of strange weeping parts that have a lot of depth and character to them. The track ends with some bell tones that move into the piece before morphing into what sounds like guitar. It's hard to tell what exactly you are listening to in this track but it is very intriguing and works well as an end to the album.

Whilst I have really enjoyed this album - Mladic in particular - and would happily recommend it I cannot shake the feeling that the tracks do not work together as a unity. The tracks do not compliment each other very well and come across like a grab bag of whatever was lying around, they don't seem to exist in the same world as one another and sound as though they were recorded months apart. Also, at times the group sport a much more direct sound compared to earlier releases, a sound most similar to Thee Silver Mt. Zion's 2010 album Kollaps Tradixionales. This change wont be to everyone's liking but there is still little denying that this is one of the heaviest and most infectious rock albums of the past few years and signals bright new things to come for the reformed GY!BE.