REVIEW: Devo - Something ELSE For Everybody 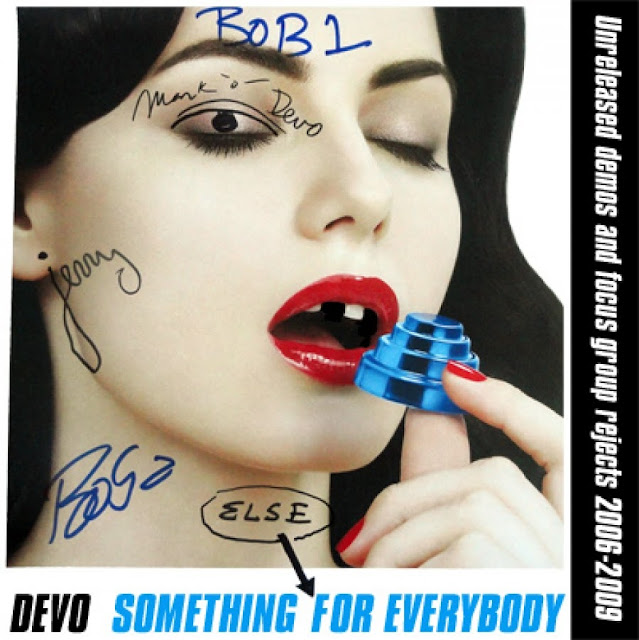 Do you want something ELSE?

Devo are a group who in the late 70's and early 80's pioneered a unique style of post-punk/new wave music that brought together kitch pop-culture, synthesizers, costumes and jerkin' rhythms that melded seamlessly with elaborate yet easy to digest political agendas. Between 1978 and 1982 a new classic Devo album was released on a yearly basis; with new ideas, costumes and musical styles being incorporated at a shockingly quick pace.

After the release of 'Oh No! It's Devo' in 1982 things started to slow down and their relevancy within the music world started to wane, it's easy in retrospect to blame the band for this period of lacklustre yet music as a whole was devolving with the ninnies and the twits taking over the musical world with mushy pop fodder: punk was indeed dead. Devo tried to evolve alongside this devolving musical world which created some truly awkward and strange moments: 1984's 'Shout' was an incredibly synthetic album that had a few good songs hidden away behind it's constant bombardment, 1988 saw Devo sign with Enigma and release the god awful 'Total Devo'; with its super fluffy digital production and lack of analog synths and hard hitting political messages it just wasn't Devo. In 1990 Devo released a second album through Enigma called 'Smooth Noodle Maps', the digital production was still there but something was different, tracks had a great energy about them and had some brilliant lyrics too, for my money this is Devo's most overlooked album, it's not fantastic but deserves more attention than what it gets. 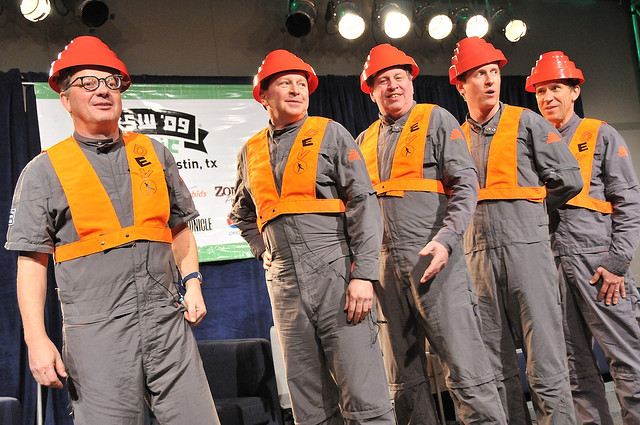 Twenty years would pass before the release of a new Devo album, which finally came in the form of the "focus group approved" 'Something For Everybody'. Most long-time fans agreed that it was the best album the group had released since 1982 which is quite an achievement for a band entering their 60's.

Alongside these main albums there has been a fair amount of other releases to tide over the hungry spuds including live albums, demos, an 'easy listening' record and bootlegs that were released even before the debut was recorded: this new release is in very good company. 'Something ELSE For Everybody' is made up predominately of reject tracks recorded during the demo sessions for 2010's 'Something For Everybody'. The only tracks that I would suggest weren't recorded at these sessions are the two tracks that bookend this release, Monsterman and a Polysics remix of the track Don't Shoot (I'm a Man). 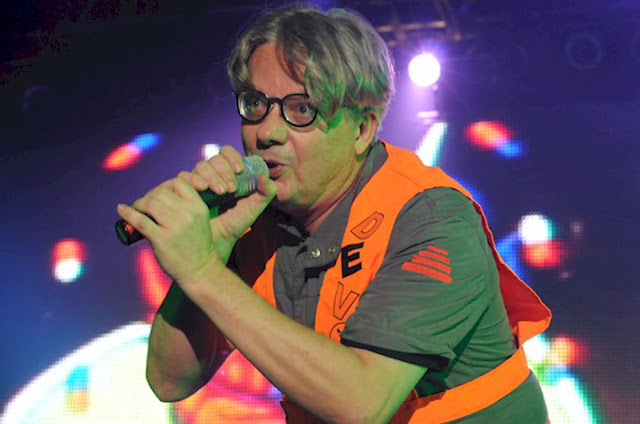 Peek-a-boo! I can see you Mark Mothersbaugh. Photo taken from Culture Bully

Due to the nature of this release I find it hard to review it like I would a regular album, as in essence this is a collection of rejected half finished tracks from a band experimenting with ideas in the studio. I'm going to treat each track individually and within the context of the demo format as I feel this is the most fair way to approach these tracks.


1) Monsterman (2:08)
Technically (like the remix that ends this release) this track has already received an official release (back in April 2012) so its inclusion here is slightly puzzling but I guess I shouldn't complain. Thankfully they had the sense to keep it to one side. Monsterman was recorded specifically for a show on SyFy called Monster Man, the show followed prop and costume makers. This track has grown on me over time (with the help of the official video), I really like the theme of mankind being the only monster their is.


2) On the Inside (2:27)
This track has a strange alt-rock vibe to it and sound like it was recorded in the mid 90s,  giving a glimpse into how an album recorded around that time might have turned out. I like parts of this track but the lyrics are plain and boring and lack bite. The first time I heard this track I thought it was Mark singing the verses but on closer inspection it seems Jerry sings everything on this release... which brings into question Mark's overall involvement with demoing 'Something For Everybody'.


3) Shoulda Said Yes (3:40)
Closer to Devo's more 'goofy' sensibilities Shoulda Said Yes goes even further into that mid-90's alt-rock sound. The track has a lot of potential but is marred by some lacklustre lyrics and odd mixing of musical styles. I can't really make sense of the lyrics but I guess it's about letting women have their way and being respectful to them?? Curiously this track (like many others on this release) sounds nothing like the tracks that actually made it on to the album, showing that a lot of styles were tried out and ultimately abandoned.


4) Think Fast (3:16)
This track - which reminds me of Cameo which ended up making it onto the actual SFE album - proposes odd situations where you must decide between the lesser of two evils, for instance whether 5 girls or 10 guys die. The subject matter can be a little heavy handed but brings up ideas of selfishness and how one thing may be deemed more 'worthy' than another. With a little more love this track could have been great but as it stands some of its elements are pretty awkward... perhaps if it were simplified and made less explicit. Musically there are a few nice elements including bongos and sitar which remind me of Mark Mothersbaugh's video game and film work. This is one of the tracks that you can feel Mark's involvement on.


5) Raise Your Hands (2:47)
Raise Your Hands explores arbitrary signals and how raising your hands in the air can have many different connotations; from Nazi salutes to concert goers pumping their fists in the air. This is one of the heavier hitting tracks and works well for the most part but the end of the chorus really rubs me the wrong way. This track had a lot of potential and could have been a great B-Side for Don't Shoot (I'm A Man) it just needed that little extra something.


6) Message of Hope (2:56)
Probably one of my favourite tracks on this release, I can imagine Mark singing this track with Jerry handling backing vocals. If this was given similar production treatment as a track like March On this could have really shone. The recording here is sadly a little on the noisy side, hopefully they'll revisit this one sometime.


7) Big Dog (3:05)
Probably one of the most synthetic tracks on the release with no guitars whatsoever and electronic drums. It is hard to know what stage this track was at, was this an initial recording that was going to have more elements added later?? I can feel Mark in here which I like but on the whole the track is a little too serious for its subject matter and the chorus vocals really needed rerecording. One of the weakest tracks here.


8) Can U Juggle? (2:48)
This track really reminds me of Jerry's side project Jihad Jerry & The Evildoers who released an album in 2006. Could this be a track that was written around the same time? It seems so to me. Bob 1's guitar really gets showcased here which is nice to hear and Mark's detuned circuit bent synth sounds have a nice appeal to them.


9) Throw Money at the Problem (3:13)
This is one of the more fleshed out tracks on this release and was given a preview listening for a private audience at Devolution (a Devo-fest) in 08 or 09. You can feel that they put a lot of effort and love into this one and it's a shame that it never got the full big studio treatment. It has a bluesy rock feel which, again, really reminds me of Jihad Jerry. The guitars sounds great on this one and Mark gets to do a little synth solo that really reminds me of Bushwacked. There are a lot of flourishes on Throw Money at the Problem and it really should have been a bonus track to SFE, I'd take this over Signal Ready any day.


10) I Luv Ur Gun (2:49)
One of the more naughty Devo tracks, it sounds like they had a lot of fun in the studio. Three guess' as to what this 'gun' is! Reminds me of I Need A Chick in its forwardness with sexual content. I Luv Ur Gun is one of the better tracks on this release just because it has such a good energy to it, I can see why it didn't make the album but I'm glad it has been included here. Mark's synth sounds great too.


11) Don’t Shoot (I’m a Man) [Polysics Remix] (3:41)
The line comes back full circle, a Polysics remix of a Devo track. This is a nice little bonus to have on this release but part of me doesn't think it belongs here at all, like Monsterman the track was created after the release of Something For Everybody and has already been given a release through Macbeth shoes, I don't see why it needs to be here. I like the remix but I'd rather listen to the original.

On the whole I have mixed feelings about this release, on the one hand I'm very happy to finally see these demos released as they were long rumoured to have existed and they give a glimpse into Devo's creative process yet on the other hand what we have here is a mixed bag of tracks and at just over 30 minutes in length it's a slim package. There are no plans for a physical release of 'Something ELSE For Everybody' either which is a shame as the digital-only nature of this release means no booklet, no credits, linear notes etc to put these tracks into context (I tried reaching Devo but couldn't get a press-release or comment) which is a little disappionting as I like to know who wrote what, were it was recorded, who was involved etc.

There are a few great tracks here (like Throw Money At The Problem and Message of Hope, I Luv Ur Gun) yet every time I listen to this release I come away wanting more. One of the biggest omissions from this release is demo versions of the songs that made it on to the SFE album, I would love to hear rough cuts of Human Rocket, Mind Games etc (perhaps there are legal reasons behind their omission?). At £7.99 on iTunes I can only really recommend this to the absolute hardcore Devo fans, if it were priced better, released in physical formats or if it included more tracks I'd find it easier to recommend. As it stands 'Something ELSE For Everybody' is a short and sometimes sweet taste of a band experimenting in the studio, trying to find their feet again... only for the hardcore.


Posted: 30th July 2013
Written by David
Email ThisBlogThis!Share to TwitterShare to FacebookShare to Pinterest
Labels: Demo, Devo, Download, Gerald Casale, Mark Mothersbaugh, Music, Review, Something ELSE for Everybody, Something For Everybody, Unreleased