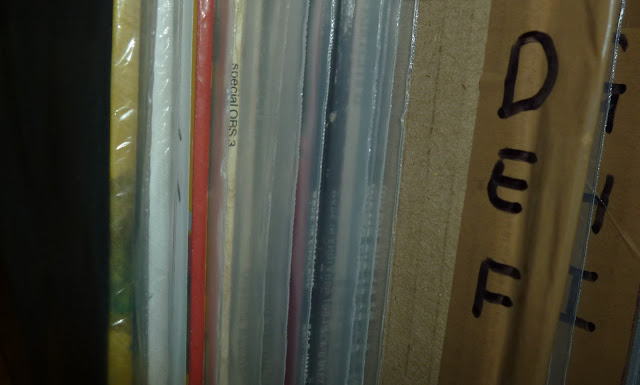 Welcome back! And welcome to D of my vinyl collection, an informal trip through my collection with quick photos and descriptions. I haven't optimised any of the photos using Photoshop as I usually would, the main reason for this is it would be too time consuming as there are a lot of records to get through. For each vinyl there will be a little write up, it might be about the packaging, the music, where I got the record etc... enjoy!... and see below for links to other parts.

P.S. I'm giving Devo their own section as I have too many Devo records to fit here so look out for a Devo special soon! 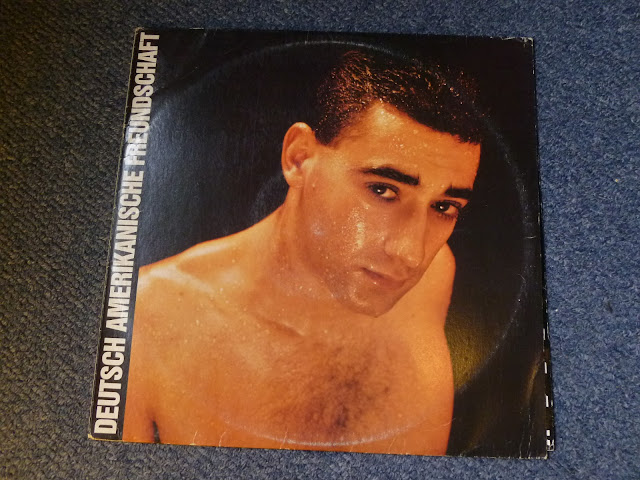 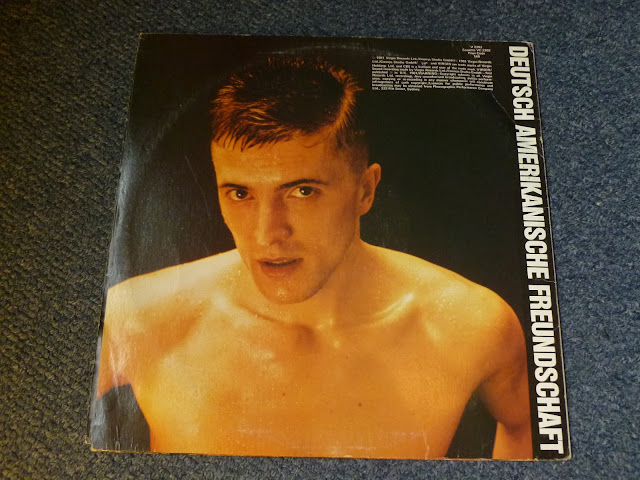 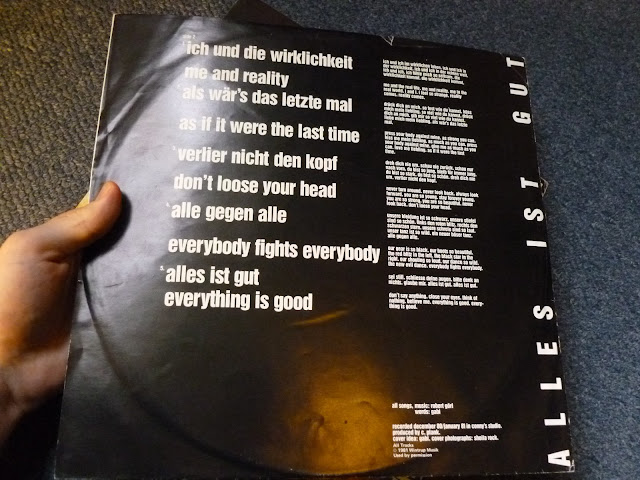 
Alles Ist Gut (Everything Is Good) is the first D.A.F. album that featured the stripped down duo sound of the group rather than the 'band' setup of previous albums. D.A.F. have a pretty unique and influential industrial/techno sound with these early albums marked by sequenced synth lines and live drums, the synths feel organic and often fall out of tune for a note or two of a sequence which gives them a wonky, unpredictable and vibrant character. You only have to listen to their most famous track 'Der Mussolini' to hear what I'm talking about. I really enjoy this album, I love the sound of these synths and the energy of the group, it's kind of a mix of post-punk, noise, industrial and early synth pop. It can be pretty hard going to listen to but there is always something going on and it's never boring. The music has an odd sexual feel to it, kind of camp but also über masculine, and the lyrics are often repetitive and simplified to the point of being nihilistic, take the lyrics to 'Rote Lippen' for example where sex is the colour red 'your dress so red / your mouth so red / mein schatz / your lips so red / mein schatz / the whole world is red / I see your mouth / mein schatz'... pretty full on! I love the artwork for this album too, it features the two members of the group, one on either side of the sleeve, both dripping in sweat or oil, hard to tell which! I picked this up for £3 on a market which is a bargain but it isn't in very good condition. It'll do for now till I pick up another copy! 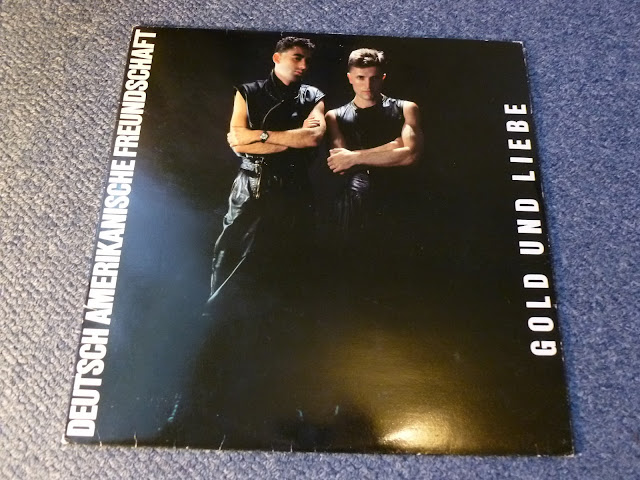 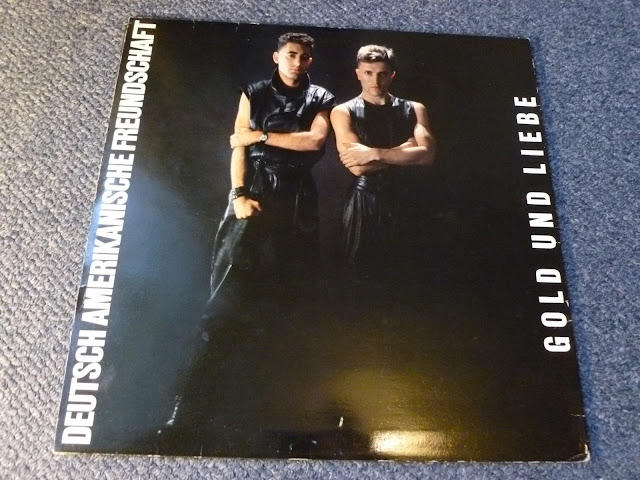 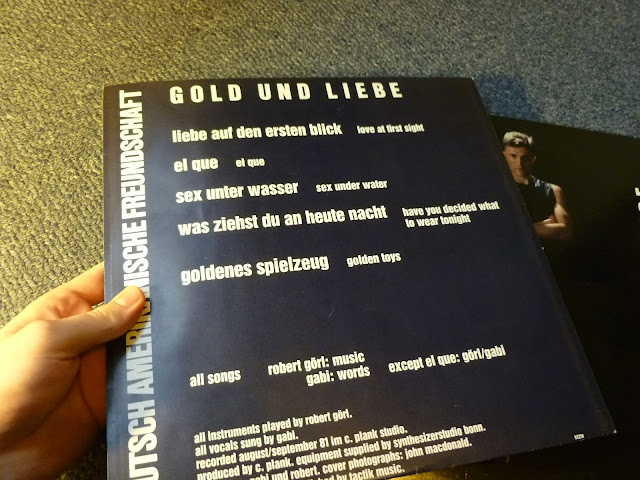 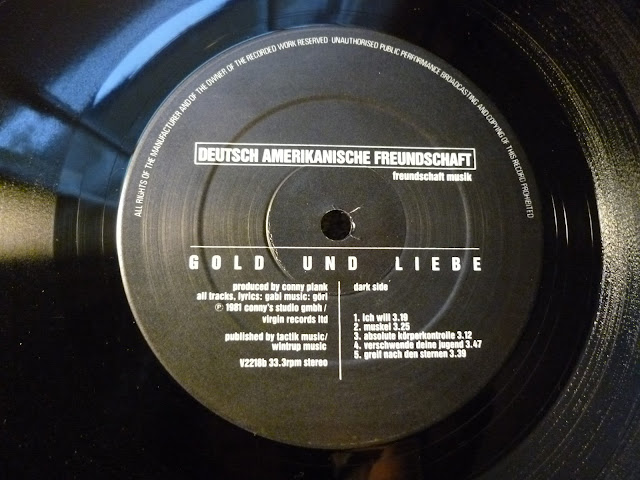 
Second D.A.F. album as a duo and this could be argued to be a more poppy album, more dance orientated and marked the way for a full embrace of what they termed 'electronic body music'. In many ways this feels like a much camper version of Alles Ist Gut and I guess it depends whether you enjoy the camp aspect of their work as to whether you'll get much from this album. To be honest I only got this album recently and haven't listened to it enough to have much an opinion on it but at the moment I feel it is the lesser of the two 1981 albums. It has a great label though, very nice! 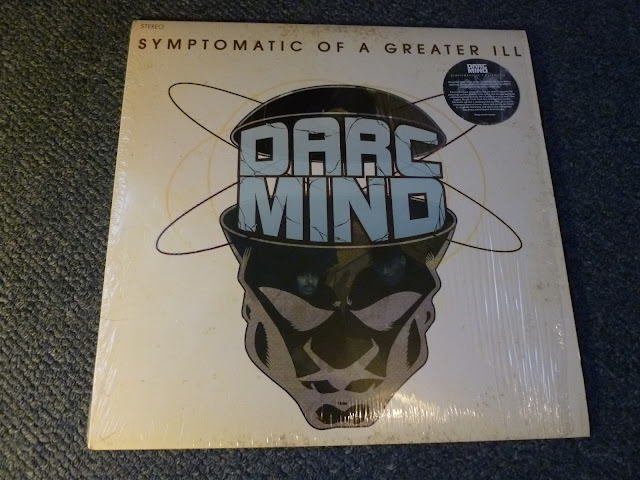 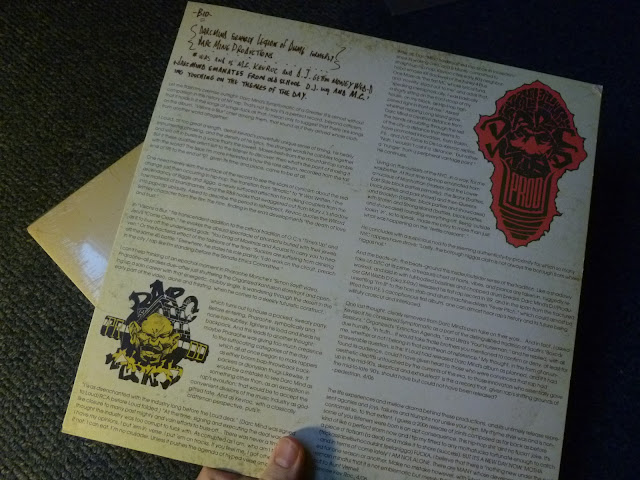 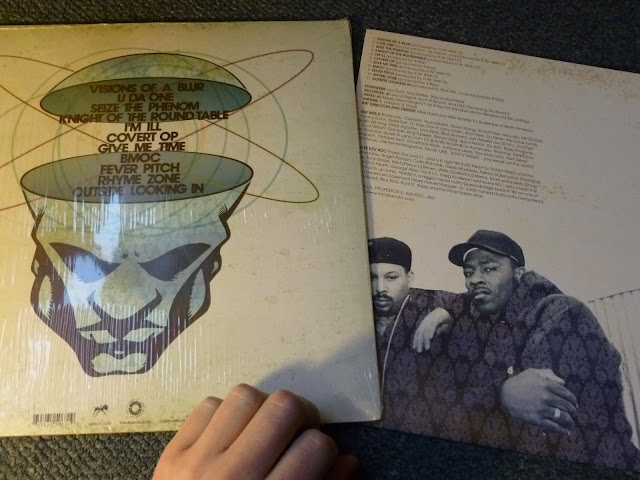 
Easily one of my favourite classic Hip Hop albums, this really did surpass any expectations I had. It has that kind of drugged up mid-90's relaxed tone but has a lot of personality and flair. Kev Roc has a unique breathy delivery that sounds like he's speaking in reverse or something, it's hard to explain but very distinctive. The production by X-Ray is great for most of the album, some tracks like 'U Da One' are maybe a bit too by-the-numbers but there are tracks here with flawless production. tracks like 'Visions of a Blur', 'Knights of the Roundtable' and 'BMOC' have production that just pops out at you. I got this for £6, it was priced low due to it being only in 'good' condition but honestly, it's near mint, very happy! This album was recorded in 1996 and was meant to be released that year but never got an official release till Anticon gave it the attention it deserved in 2006, brilliant release. 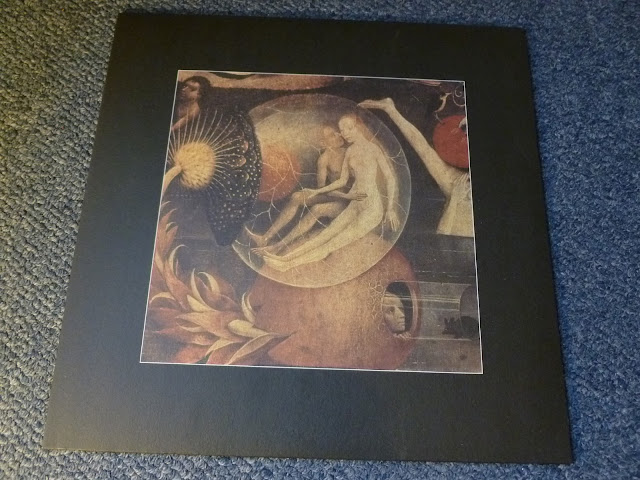 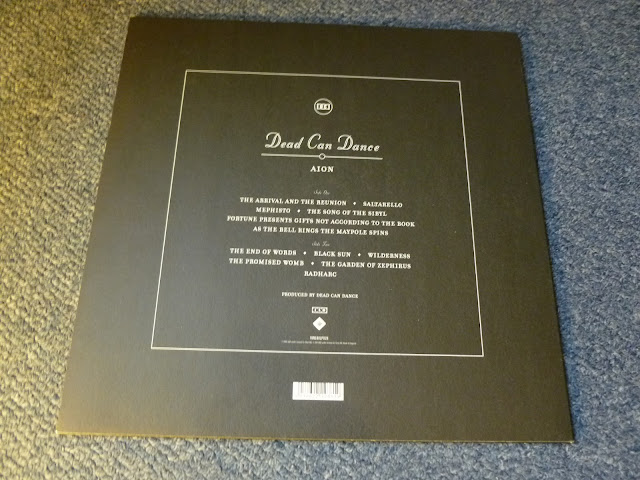 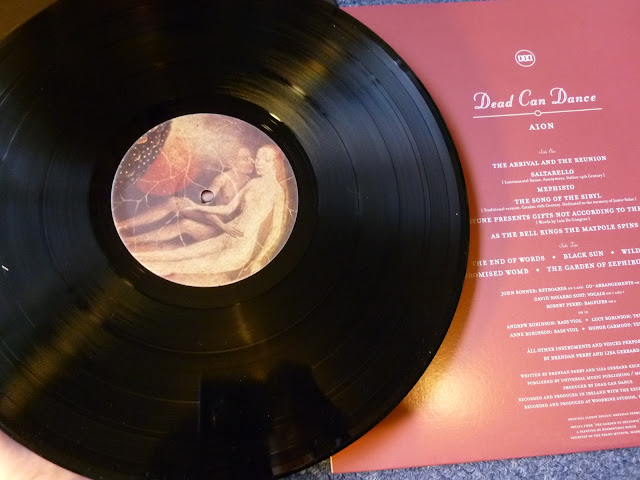 
This is my girlfriend's vinyl so I don't have much to say on it, it was £10 from Fopp which is great seeing as Dead Can Dance vinyl always goes for tons, even if it's beaten up. From what I've heard from Dead Can Dance this is one of the better albums by the group and features artwork by Hieronymus Bosch. I think there was a Dead Can Dance box set made around the same time as this vinyl and it does feel like it belongs in a collection of other releases which is a bit of a shame. I would have preferred they kept the design the same as the original but never mind. I got into Dead Can Dance through tracks by This Mortal Coil that feature Lisa Gerrard. 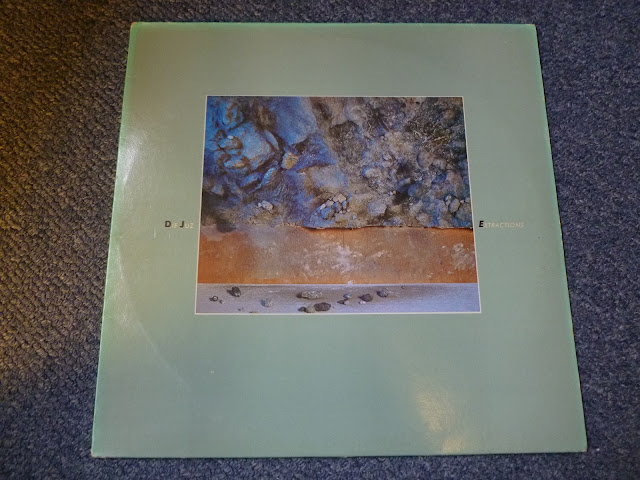 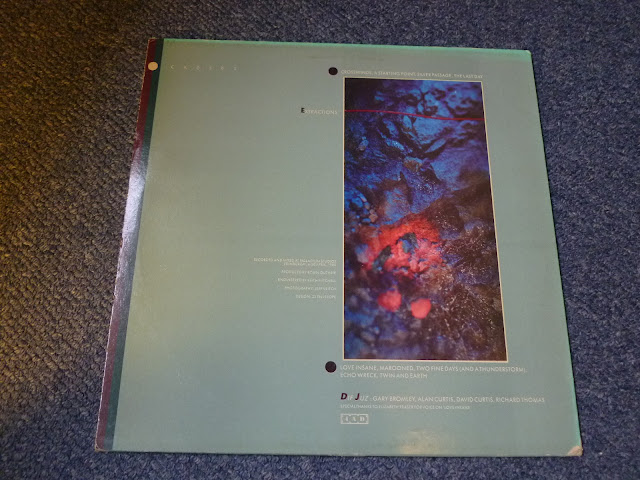 
Great early instrumental 'dream pop' / 'shoegaze' album on 4AD. They had previously released EPs in the early 1980's but this would be their only full album. Features some great playing, amazing production and a nice chilled out atmosphere. The album features a guest vocal on 'Love Insane' by Cocteau Twins vocalist Elizabeth Fraser who was pretty huge at the time. Definitely worth checking out if you can get hold of it. I can't remember where I got this, maybe I got it off Discogs or something, I remember getting it for around £5-6. I'm not a huge fan of the artwork but each to their own, kind of reminds me of some of the Cocteau Twins album artwork, maybe albums like Treasure or Victorialand. But the music, very very good! 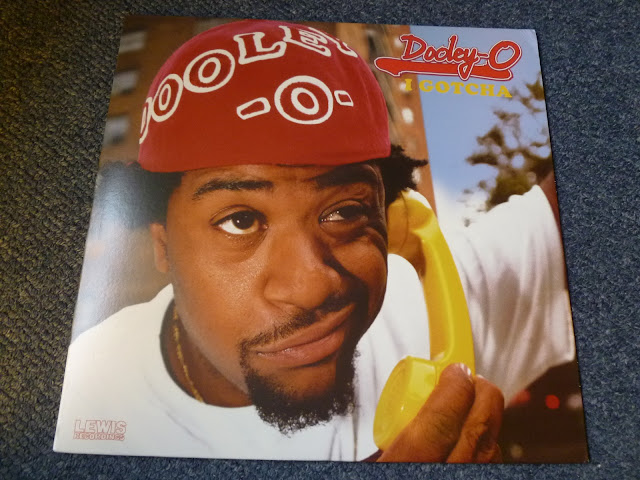 Got this for £1 sealed as I knew it was on the same label that Edan has been releasing stuff on, Lewis Recordings. It's an okay hip hop album but doesn't do much for me personally. I don't have much to say about this one, I'm sure others may enjoy it but I was just thankful I got it cheap!